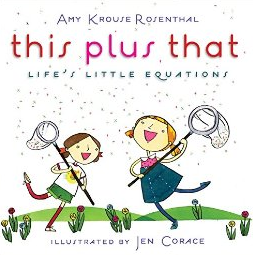 Last week, during our school’s March Picture Book Madness event, our class read Amy Krouse Rosenthal’s this plus that: Life’s Little Equations. While I’ve read this book to my Kindergarten students many times since it’s publication in 2011, I struggled to make it through the text this year for obvious reasons. Each equation took on new meaning and significance this year. When it came time to vote, the book’s opponent collected more votes in my classroom. This week, we moved on with our brackets, but what I didn’t realize was that Amy’s gift to the world left an impression on one particular student, a boy named Ben. While making my rounds during Writer’s Workshop yesterday, I stopped at Ben’s table to check in with him and his fellow writers. I couldn’t believe my eyes when I sat down next to Ben to begin conferring with him.

He was writing his own book of life’s little equations! This is the first time I’ve seen Ben honor the work of an author in his own writing. It got me thinking why this particular book? I asked him what inspired him. He said, “You know I love math, so I really liked the equations. I liked that it wasn’t a story, but something different. I also like how it made me feel.” It pays to stop, look, listen, and hear, doesn’t it? The wisdom of a 6-year old boy, and the power of a read aloud.

My conversation with Ben inspired me to write this poem. Inspiration comes from the most magical places and moments.

I had no idea

You listened as I read

You laughed at the humor

You “awww”ed at the sweetness

It stayed with you

But there you are, among the inspired

This post is part of the annual month-long Slice of Life writing challenge organized by Two Writing Teachers. Join us! It’s my first time slicing, I’m a slicing planner, and apparently an “Early Morning Slicer,” too!