This summer I have been exploring the new-ish Assabet River Rail Trail (ARRT) that runs through my small New England town. While much of it is inland, skirting the Assabet River National Wildlife Refuge, the section within walking distance from my house meanders along a lovely stretch of Thoreau’s beloved Assabet River. The stone marker you see above marks the entrance to Ice House Landing, a popular kayak launch and small picnic area. My husband and I don’t own bikes or our own kayak (YET!), so this natural oasis is unfamiliar to us.

I have intentionally left a camera of any sort behind on all my walks thus far. When I have a camera with me, I find I tend to be constantly looking for the perfect shot and not open to taking it all in — sight and sound. Of course now that I’m writing this, I wish I had photos to share, but honestly, I don’t believe photos would do it justice.

The Thoreau quote, “River towns are winged towns,” conjures up several meanings for me personally. As a bit of a bird nerd, and just having returned from a week-long Bird Sleuth course at Cornell’s Lab of Ornithology, I think of all the birds who make their home in this riparian environment. (I saw a Great Blue Heron almost immediately my first time on the trail!) Then I also think of the movement of the river and how it flows from one  small town to the next, connecting them with its own parallel trail. Lastly, I believe the ARRT has given the residents of the communities it links movement. It’s exciting to see so many residents of my town running, walking, and biking along the trail. I often see adults with children in strollers who now have a lovely way of introducing their child or perhaps grandchild to nature.

What a treasure, and how grateful I am to have discovered it. Next time I’m bringing my camera!

It was 7:00 Saturday morning on the porch. Our first real warm early morning. The birds were singing their little hearts out, the coffee in my mug steamed happily into the air, and my notebook was in play for the first time all week.

Suddenly, I heard rustling in the garden bed before me. The tall feathery ferns parted and made way for an unexpected visitor.

While her appearance at that moment took me by surprise, this beauty of a snapping turtle had been spotted the day before searching for a safe spot to lay her eggs. Several neighbors had contacted me to let me know my rose bed across the street seemed to be on her list of options. My assumption was she had moved on.

Apparently she spent the night well-hidden and comfortable in my front garden bed. We live just above the Assabet River that meanders its way through my small New England town, so it’s not unheard of for turtles to make the journey up the steep hill this time of year, but it hasn’t happened often in the 15 years we’ve lived here. 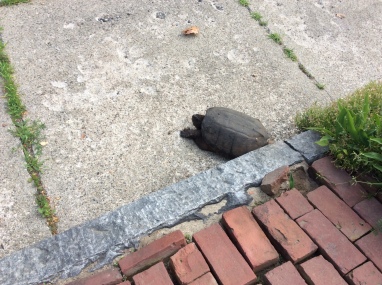 My husband and I sat and watched her in amazement as she sat and watched us in possibly in amazement.  Eventually she made her way out of the garden bed, across our brick walkway, and down the sidewalk. I hoped she would head towards the river to safety, but instead she returned to a second location she scouted out the day before. This time in our neighbors front yard. She climbed up and it appeared she was satisfied with this spot and ready to lay her eggs. We had to dash, but a neighbor began time-lapse filming what happened next. We haven’t had a chance to follow-up with him yet, but it doesn’t appear this spot was used either. I guess only she knows which spot will be just right. To us, it’s a mystery.